A city of great minds and tolerance

Back in the Middle Ages, Gouda became a thriving city due to the location where the Hollandsche IJssel and the Gouwe merge. The strategic trading position made Gouda a wealthy city, where the textile industry, beer brewing, and eventually cheese trading quickly developed. Several buildings of this prosperous time have been preserved in the historic city center, such as the Sint-Janschurch, the longest church of the Netherlands, and the Old Town Hall that was finished in 1459 which is one of the oldest Gothic city halls in the Netherlands. The Old Town Hall is famous around the world and draws a lot of tourists to Gouda every year.

Apart from the historical heritage, Gouda is also well known for its syrup waffles, candle making, Gouda faience, pipes, and the annual Candle Evening. This is an event on which the candles in the enormous Christmas tree in front of the City Hall are lit, as well as thousands of candles in the surrounding houses. But most of all is Gouda known for its cheese, known as Gouda cheese or just Gouda all over the world. However, syrup waffles are gaining terrain on global popularity. Which we can understand.

studied at the parish school, the forerunner of the Latin school of Gouda and the Coornhert Gymnasium after that. Erasmus was known as a great humanist. He pleaded for freedom of religion, science, ideas, and for people to think for themselves. Also Dirck Volkertszoon Coornhert, after which our school, Coornhert Gymnasium, is named, lived in Gouda. He also was a famous humanist and renaissance thinker. He is buried in the Sint-Janschurch. Moreover born in Gouda were the brothers Cornelis and Frederik de Houtman who were the first Dutchmen to sail to the Indies. 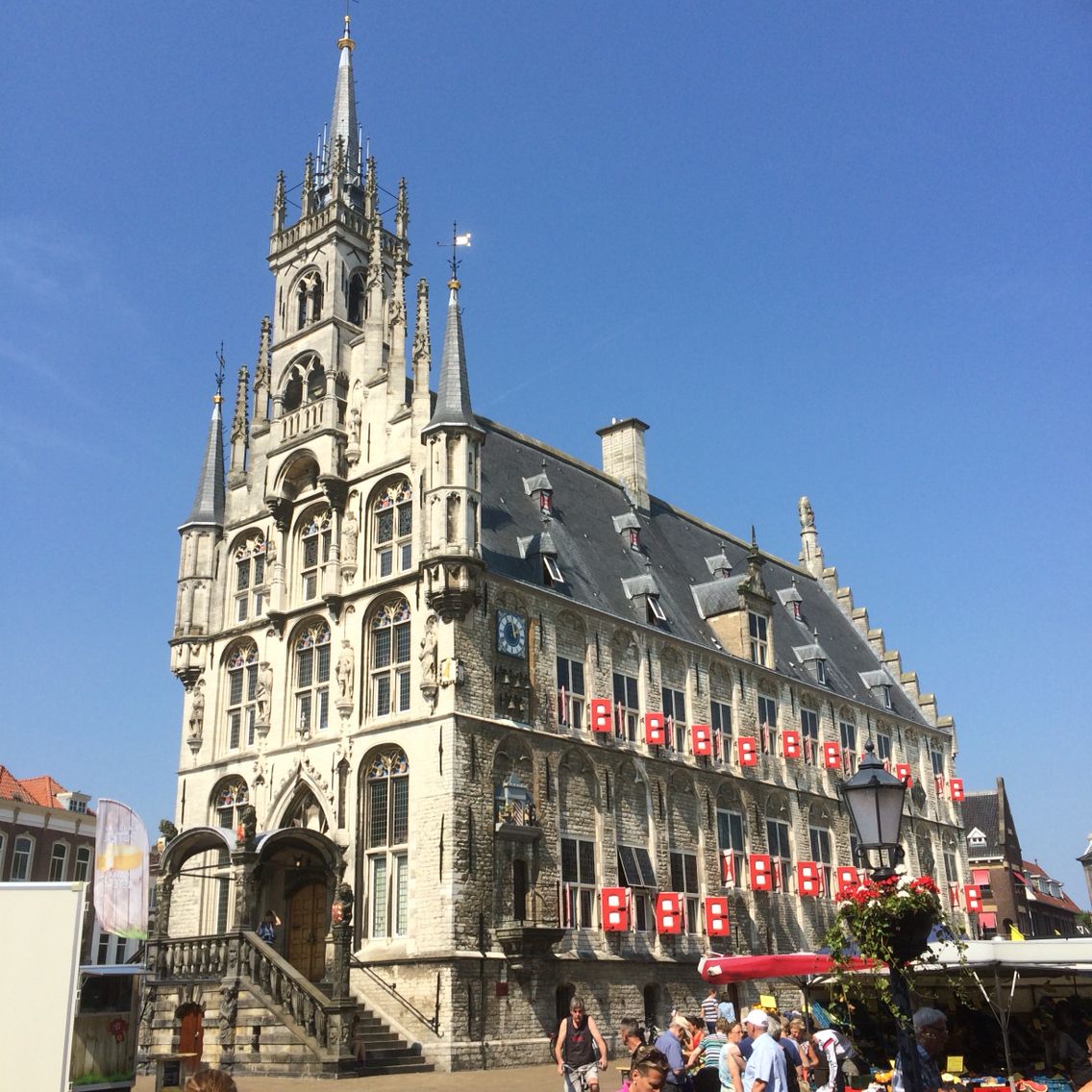 The old city hall of Gouda 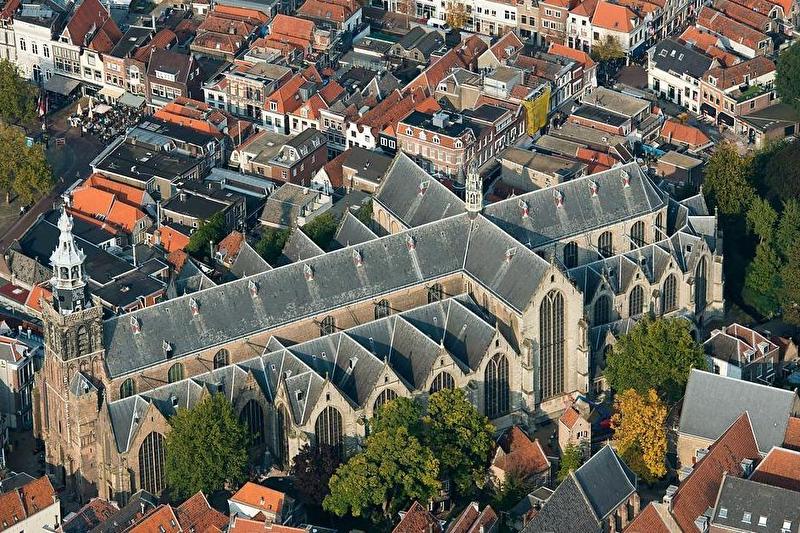 The Sint-Janskerk is the longest church in the Netherlands, but it is most famous for its 72 stained glass windows. The windows are extraordinary pieces of art, but they are not just important because of their beauty and excellent quality. Almost all of the so-called cartons, which are the original drawings of the windows, have been preserved. The cartons were made with charcoal and chalk. And they were drawn on a 1:1 scale meaning they are just as large as the windows, which are up to 22 meters high.

De Waag (the weigh house) is a building across the market on the backside of the city hall. Inside goods were weighed and duty was paid on them. The building was built in 1668 and designed by well-known artist Pieter Post. Who also designed the royal palace Huis ten Bosch and De Waag in Leiden. De Waag now serves as a museum. 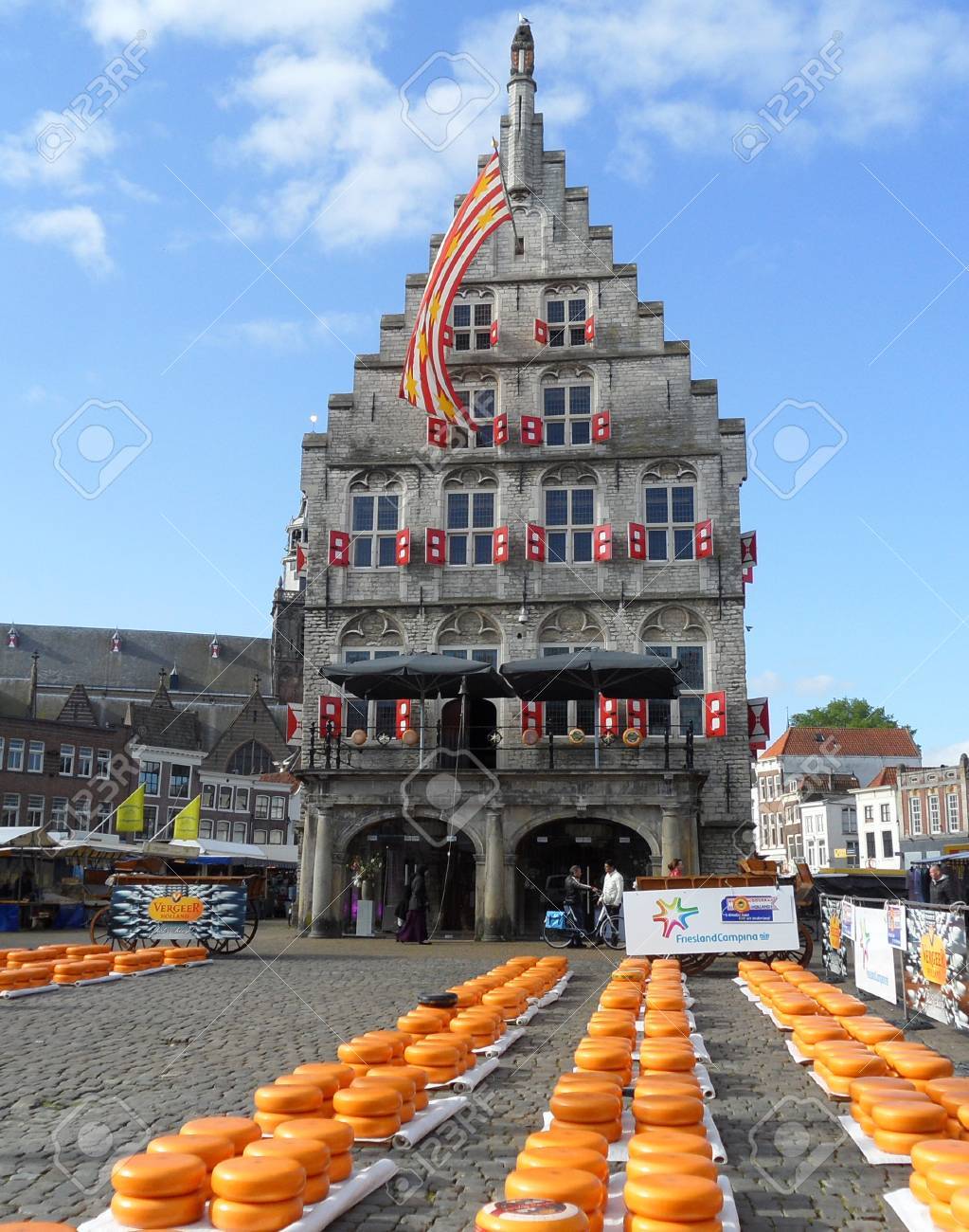 The Market is the central square in the inner city of Gouda. After the construction of the city hall, this market was built around it. The market has been an important trading center for centuries. A lot of goods have been traded on the market, but livestock dairy products and meat were the most prominent. 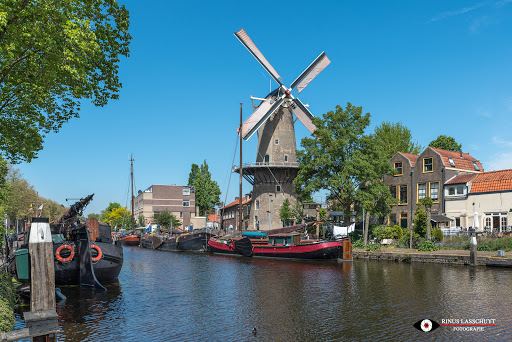 Walking through the city

If you would like to walk a pre-made route through Gouda we recommend the Xplore Gouda app. They have a lot of routes of varying interests and lengths available to you whenever you want. The app can also give details about the monuments and buildings you come across whilst you walk through the city.